In classical programming, software instructions are explicitly made by programmers and nothing is learned from the data at all. In contrast, machine learning is a field of computer science which uses statistical methods to enable computers to learn and to extract knowledge from the data without being explicitly programmed.

Also, traditional learning algorithms are not able to do feature extraction: Artificial intelligence specialists need to figure out a good data representation which is then sent to the learning algorithm. Examples of traditional machine learning techniques include SVM, random forest, decision tree, and kk-means, whereas the central algorithm in deep learning is the deep neural network.

A lot of deep learning techniques have been known for a very long time, but recent advances in hardware rapidly boosted deep learning research and development. Nvidia is responsible for the expansion of the field because its GPUs have enabled fast deep learning experiments.

Grid search is a common method for finding the optimal hyperparameters. It’s a brute-force method: It means trying all possible combinations of hyperparameters over a defined range and choosing the combination that maximizes a predefined metric.

One way to classify learning algorithms is drawing a line between supervised and unsupervised algorithms. (But that’s not necessarily that straightforward: Reinforcement learning lies somewhere in between these two types.)

When we talk about supervised learning, we look at (xi,yi)(xi,yi) pairs. xixi is the algorithm’s input and yiyi is the output. Our task is to find a function which will do the correct mapping from xixi to yiyi.

Reinforcement learning uses rewards: Sparse, time-delayed labels. An agent takes action, which changes the environment, from which it can get a new observation and reward. An observation is the stimulus an agent perceives from the environment. It can be what the agent sees, hears, smells, and so on.

A reward is given to the agent when it takes an action. It tells the agent how good the action is. By perceiving observations and rewards, an agent learns how to optimally behave in the environment. I’ll get into this in more detail below.

Finally, inverse reinforcement learning tries to reconstruct a reward function given the history of actions and their rewards in various states.

Any fixed instance of parameters and hyperparameters is called a model. Machine learning experiments usually consist of two parts: Training and testing.

During the training process, learnable parameters are tuned using training data. In the test process, learnable parameters are frozen, and the task is to check how well the model makes predictions on previously unseen data. Generalization is the ability of a learning machine to perform accurately on a new, unseen example or task after having experienced a learning dataset.

If a model is too simple with respect to the data, it will not be able to fit the training data and it will perform poorly both on the training dataset and the test dataset. In that case, we say the model is underfitting.

If a machine learning model performs well on a training dataset, but poorly on a test dataset, we say that it’s overfitting. Overfitting is the situation where a model is too complex with respect to the data. It can perfectly fit training data, but it is adapted so much to the training dataset that it performs poorly on test data—i.e., it simply doesn’t generalize.

Below is an image showing underfitting and overfitting compared with a balanced situation between the overall data and the prediction function. 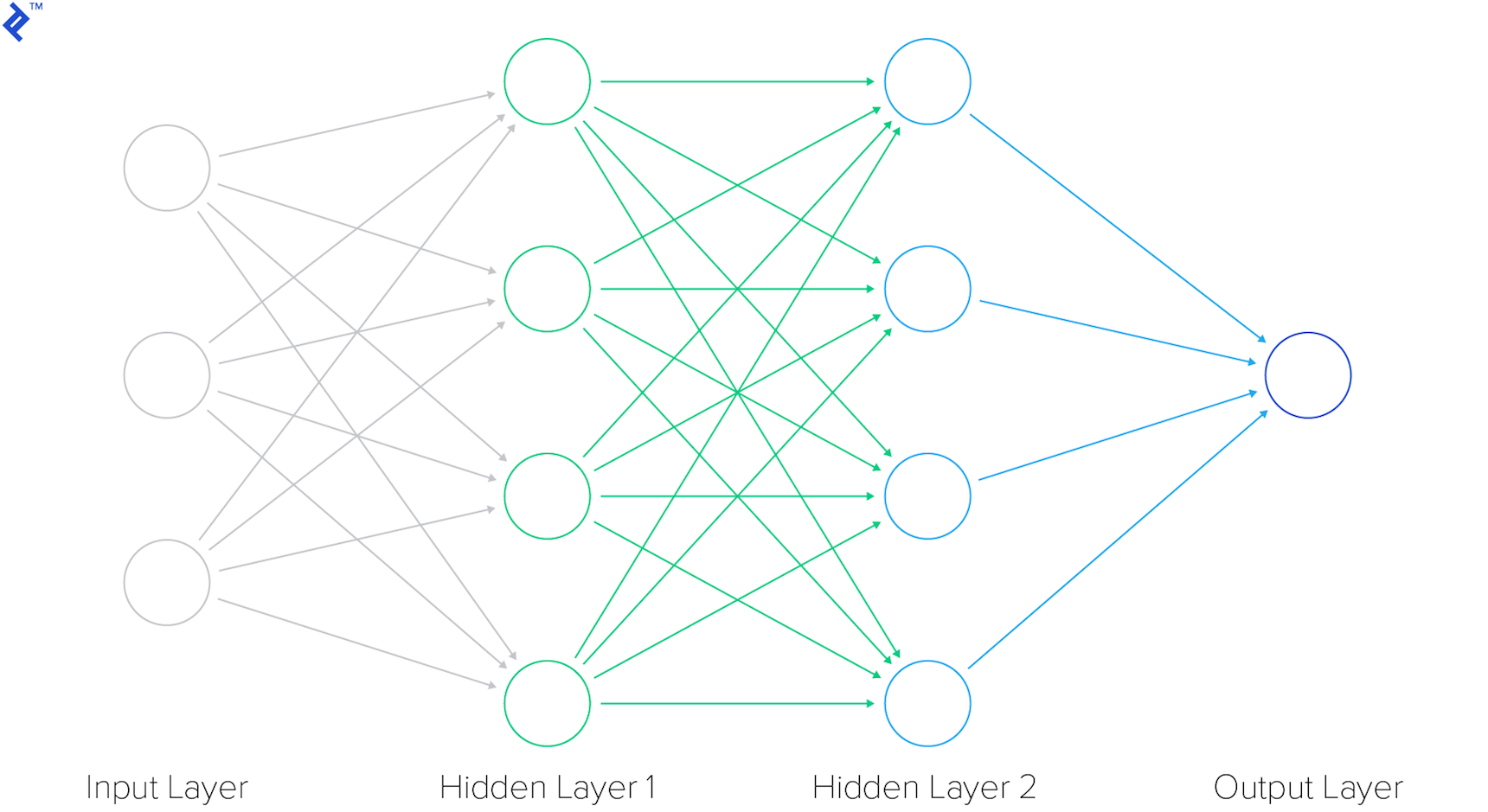 If a neural network has more than one hidden layer, we call it a deep neural network. The input set XX is given to the neural network and the output yy is obtained. Learning is done using a backpropagation algorithm which combines a loss function and an optimizer.

Below is how one convolutional kernel in a convolutional layer works. The kernel is applied to the image and a convolved feature is obtained.

ReLU layers are used to introduce non-linearities in the neural network. Non-linearities are important because with them we can model all kind of functions, not only linear ones, making neural network a universal function approximator. This makes a ReLU function be defined like this:

Below is a plot of a ReLU function.

As you can see, this ReLU function simply changes negative values to zeros. This helps prevent the vanishing gradient problem. If a gradient vanishes, it will not have large impact in tuning the neural network’s weight.

Using deep learning, it’s possible to create an end-to-end system that takes high-dimensional input—e.g. video—and from it, it learns the optimal strategy for an agent to take good actions.

In 2013, London AI startup DeepMind created a great breakthrough in learning to control agents directly from high-dimensional sensory inputs. They published a paper, Playing Atari with Deep Reinforcement Learning, in which they showed how they taught an artificial neural network to play Atari games just from looking at the screen. They were acquired by Google, and then published a new paper in Nature with some improvements: Human-level control through deep reinforcement learning.

As opposed to other machine learning paradigms, reinforcement learning doesn’t have a supervisor, only a reward signal. Feedback is delayed: It is not instantaneous as in supervised learning algorithms. Data is sequential and an agent’s actions affect the subsequent data it receives.

Now, an agent is situated in its environment, which is in a certain state. To describe this in more detail, we use a Markov decision process, which is a formal way of modeling this reinforcement learning environment. It’s made up of a set of states, a set of possible actions, and rules (e.g., probabilities) for transitioning from one state to another. 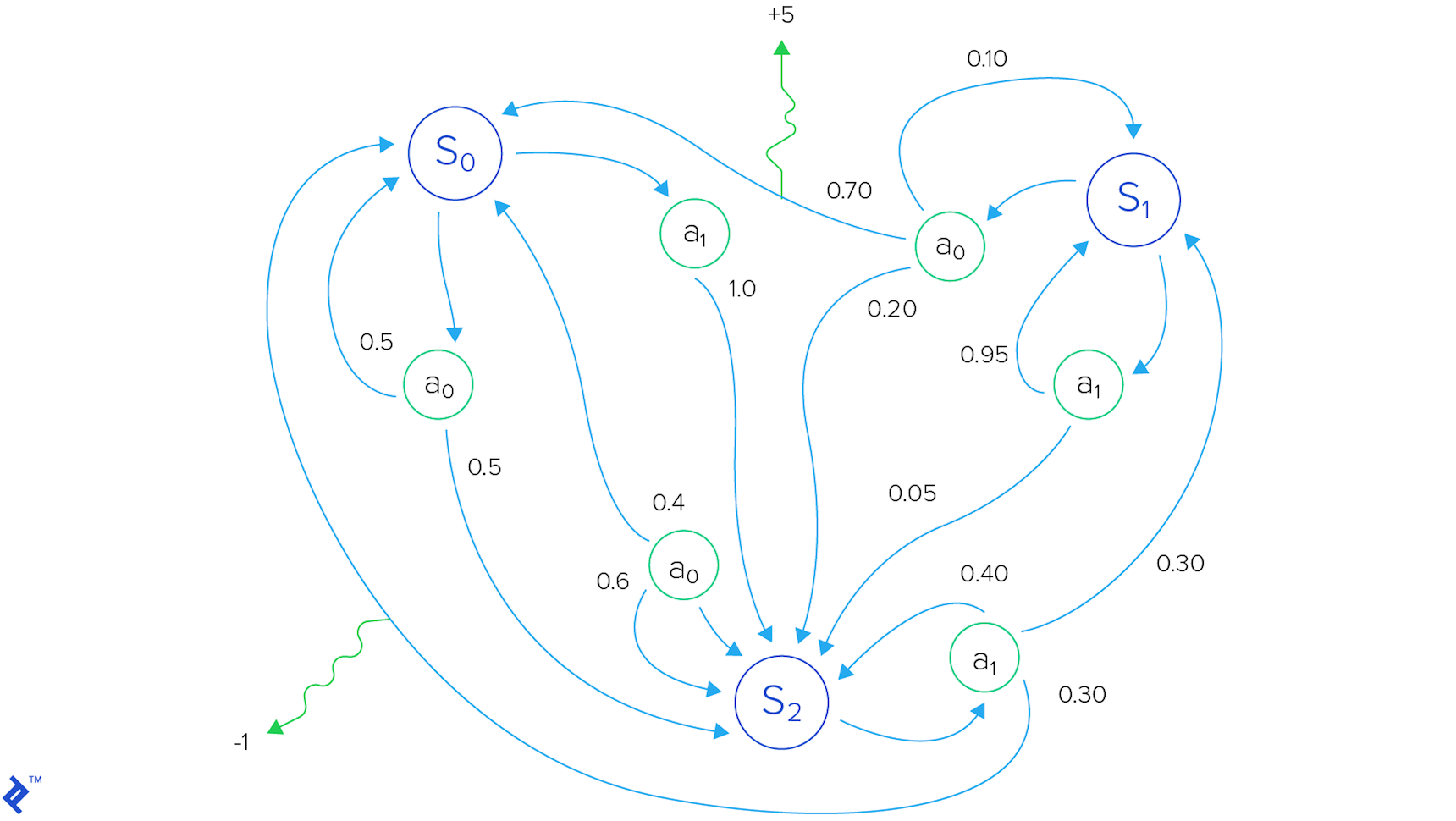 The agent is able to perform actions, transforming the environment. We call the reward RtRt. It’s a scalar feedback signal indicating how well the agent is doing at step tt.

For good long-term performance, not only immediate rewards but also future rewards must be taken into account. The total reward for one episode from time step tt is Rt=rt+rt+1+rt+2+…+rnRt=rt+rt+1+rt+2+…+rn. The future is uncertain and the further we go in the future, the more future predictions may diverge. Because of that, a discounted future reward is used: Rt=rt+γrt+1+γ2rt+2+…+γn−trn=rt+γRt+1Rt=rt+γrt+1+γ2rt+2+…+γn−trn=rt+γRt+1. An agent should choose the action which maximizes the discounted future reward.

The approximation of Q-values using non-linear functions (neural networks) is not very stable. Because of that, experience replay is used for stability. Experience during episodes in a training session are stored in a replay memory. Random mini-batches from the replay memory are used instead of using the most recent transition. This breaks the similarity of subsequent training samples which would otherwise drive the neural network into a local minimum.

The “Deep Q-learning algorithm with Experience Replay” from DeepMind’s paper Playing Atari with Deep Reinforcement Learning is shown below. 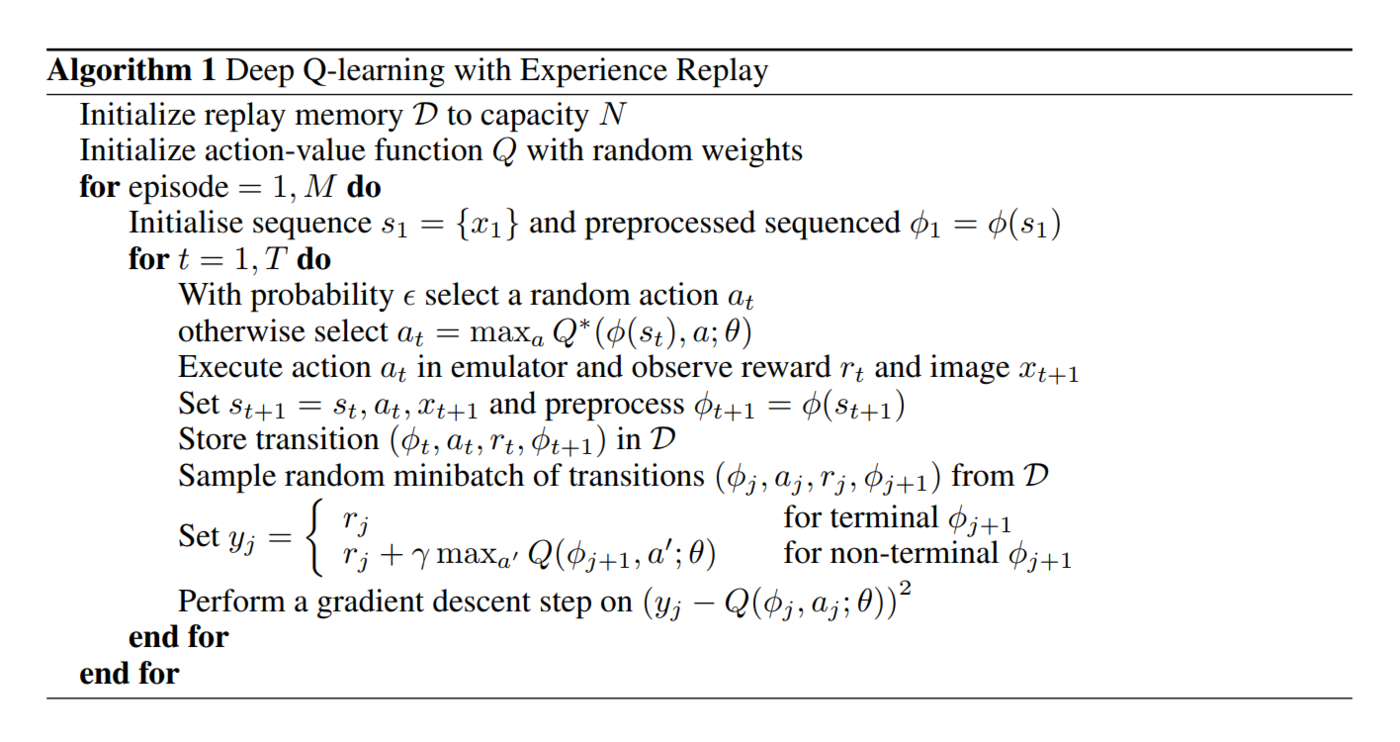 DeepMind refers to convolutional networks trained with their approach as Deep Q-networks (DQN).

Flappy Bird was a popular mobile game originally developed by Vietnamese video game artist and programmer Dong Nguyen. In it, the player controls a bird and tries to fly between green pipes without hitting them.

Below is a screenshot from a Flappy Bird clone coded using PyGame: 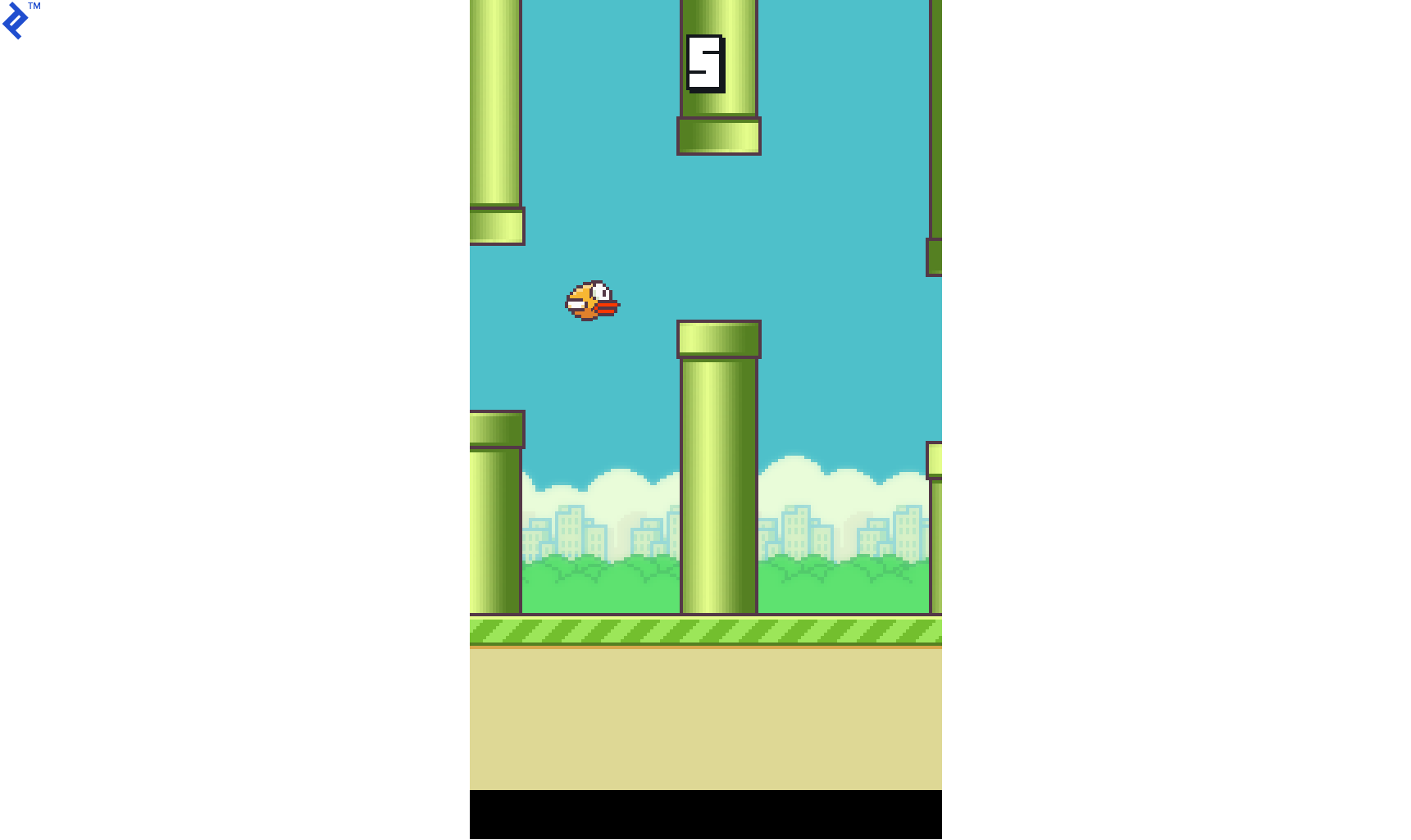 The clone has since been forked and modified: The background, sounds, and different bird and pipes styles have been removed and the code has been adjusted so it can easily be used with simple reinforcement learning frameworks. The modified game engine is taken from this TensorFlow project: 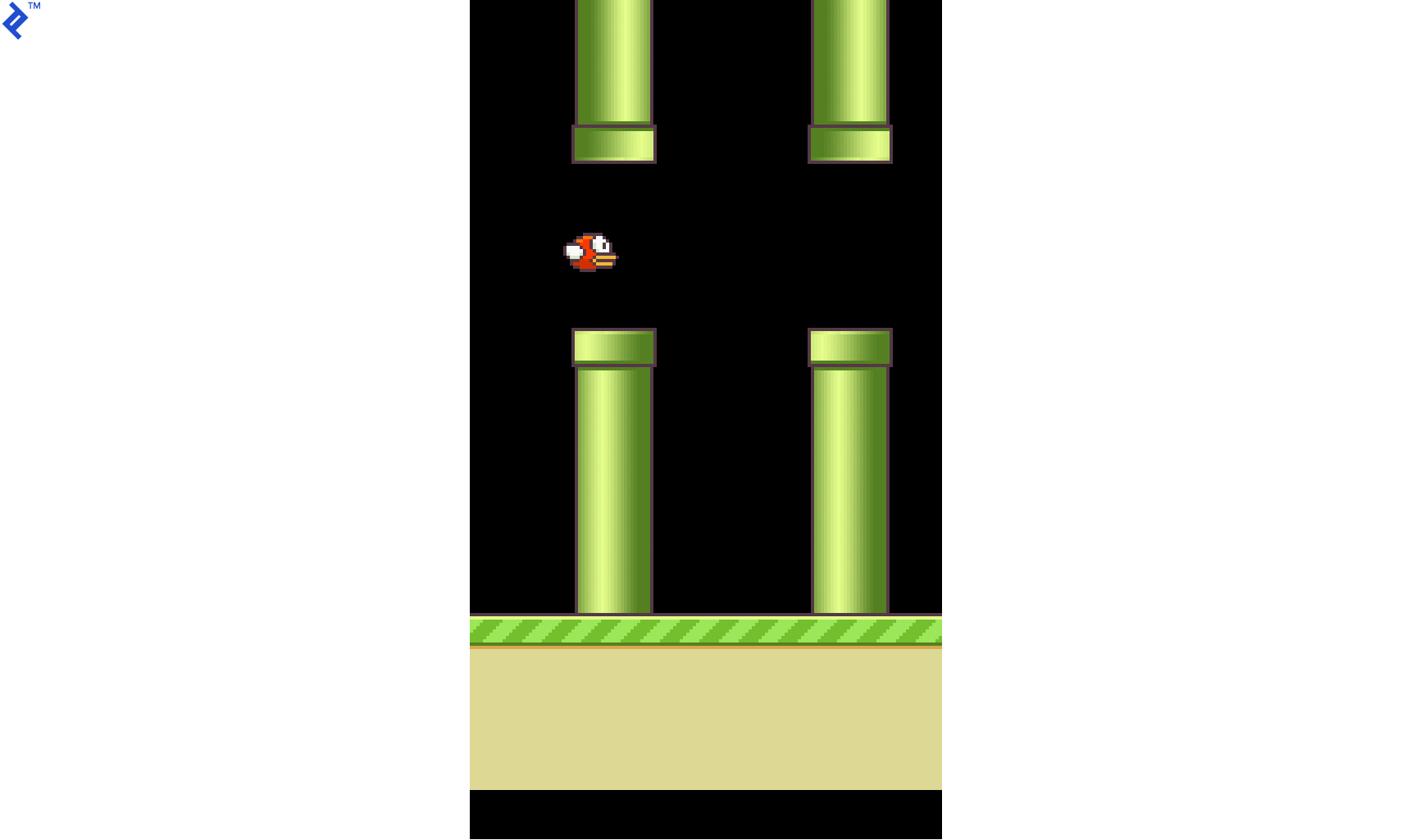 The neural network architecture is the same as DeepMind used in the paper Human-level control through deep reinforcement learning.

There are three convolutional layers and two fully connected layers. Each layer uses ReLU activation, except the last one, which uses linear activation. The neural network outputs two values representing the player’s only possible actions: “Fly up” and “do nothing.”

The input consists of four consecutive 84×84 black-and-white images. Below is an example of four images which are fed to the neural network.

You’ll notice that the images are rotated. That is because the output of the clone’s game engine is rotated. But if the neural network is taught and then tested using such images, it will not affect its performance.

Also, epsilon is changed to be much more reasonable for this game. DeepMind uses an epsilon of one, but here we use 0.1. This is because higher epsilons force the bird to flap a lot, which pushes the bird toward the upper border of the screen, always eventually resulting in the bird crashing into a pipe.

The game should be instantiated:

Now we need to initialize the first state. An action is two-dimensional tensor:

The frame_step method gives us next screen, reward, and information as to whether the next state is terminal. The reward is 0.1 for each bird’s move without dying when it is not passing through a pipe, 1 if the bird successfully pass through a pipe and -1 if the bird crashes.

The resize_and_bgr2gray function crops the floor, resizes screen to an 84×84 image, and changes the color space from BGR to black-and-white. The image_to_tensor function converts the image to a PyTorch tensor and puts it in GPU memory if CUDA is available. Finally, the last four sequential screens are concatenated together and are ready to be sent to the neural network.

The initial epsilon is set using this line of code:

The main infinite loop follows. Comments are written in the code and you can compare code with the Deep Q-learning with Experience Replay algorithm written above.

Now that all the pieces are in place, here’s a high-level overview of the data flow using our neural network:

Here is one short sequence with a trained neural network.

The neural network shown above was trained using a high-end Nvidia GTX 1080 GPU for a few hours; using a CPU-based solution instead, this particular task would take several days. The game engine’s FPS were set to a very large number during training: 999…999—in other words, as many frames per second as possible. In testing phase, the FPS was set to 30.

Below is a chart showing how the maximum Q-value changed during iterations. Every 10,000th iteration is shown. A downward spike means that for a particular frame (one iteration being one frame) the neural network predicts the bird will get a very low reward in the future—i.e., it will crash very soon. 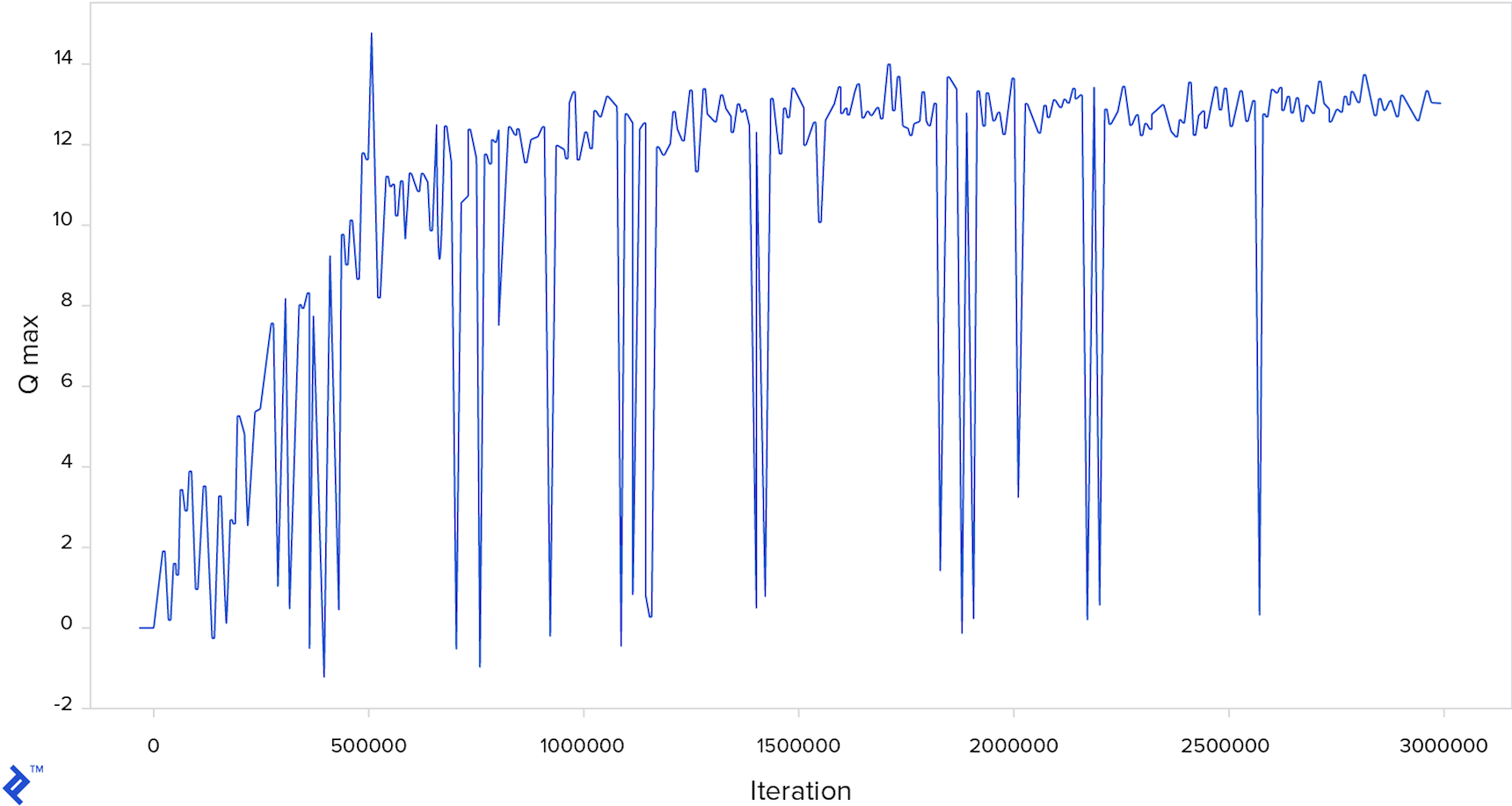 The full code and pretrained model are available here.

In this PyTorch reinforcement learning tutorial, I showed how a computer can learn to play Flappy Bird without any previous knowledge about the game, using only a trial-and-error approach as a human would do when encountering the game for the first time.

It is interesting that the algorithm can be implemented in a few lines of code using the PyTorch framework. The paper on which the method in this blog is based is relatively old, and a lot of newer papers with various modifications which enable faster convergence are available. Since then, deep reinforcement learning has been used for playing 3D games and in real-world robotic systems.

Companies like DeepMind, Maluuba, and Vicarious are working intensively on deep reinforcement learning. Such technology was used in AlphaGo, which beat Lee Sedol, one of the world’s best players at Go. At the time, it was considered that it would take at least ten years until machines could defeat the best players at Go.

The flood of interest and investments in deep reinforcement learning (and in artificial intelligence in general) might even lead to potential artificial general intelligence (AGI)—human-level intelligence (or even beyond) that can be expressed in the form of an algorithm and simulated on computers. But AGI will have to be the subject of another article.